Tonight I’ll be a guest on Jerrod Gunning’s Savage Worlds GM Hangout (On Air!) Youtube show (airing 7-8PM PST). The gang there is currently running a series where they collaborate to brainstorm a Savage Worlds setting, and I’ve been invited to contribute to a kaiju setting. As regular readers of my blog know, kaiju eiga are a subject near and dear to my heart and I've already written quite a few posts about them – including an incomplete setting... 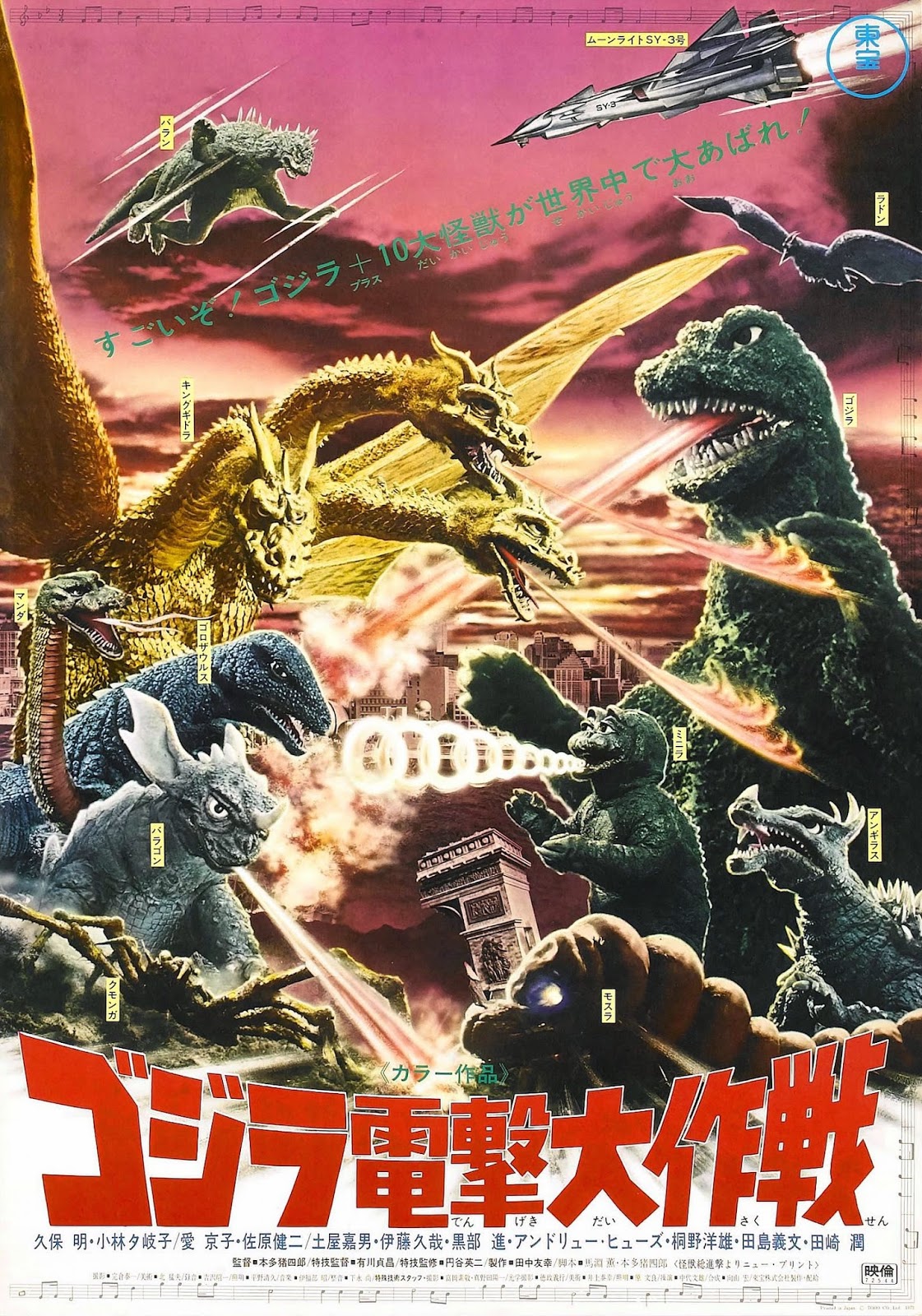 MKST!!!* is a setting inspired by aspects of the Godzilla films of the late ‘60s and early ‘70s. It’s odd, but as much as those films were really goofy and child-friendly, a lot of them were essentially spy movies. While Godzilla himself was stomping around fighting outlandish foes like Gigan and Megalon, the humans in the movies were engaging in James Bond-esque shenanigans like infiltrating secret bases and having doomed romances with sexy cyborgs. Mecha Kaiju Sensō Tai!!! embraced the espionage aspects of these films while dialing down the childishness.

Mecha Kaiju Sensō Tai!!!: Battling Robots and Monsters for Savage Worlds
Well, the later posts, at least, pushed the setting further into spy-fi and away from its kids movies origins. The first, main post embraces the ridiculousness much more. "Battling Robots and Monsters" outlines broad strokes of the setting details and house rules, laying out the basic assumption that all players play both a human(oid) and a mecha or kaiju, that the giant characters are played using the same stat range as the humans (just on a bigger scale), and that the central conflict is a war between different factions from the future with modern humankind caught in the crossfire.

Mecha Kaiju Sensō Tai!!!: The Grand Unified Theory of Kaiju
I'm not a huge fan of setting fiction, but for some reason I really felt like writing the info-dumps for MKST!!! as fiction. In this piece, a scientific conference discovers the secret origin of kaiju -- but at a disastrous cost.

Mecha Kaiju Sensō Tai!!!: There Have Always Been Dragons
Time-traveling super-woman Princess Kaji shares the secrets of the Time War with Kwinn Martin, an Inuit secret agent. I would love to write a novel starring these two.

Mecha Kaiju Sensō Tai!!!: Soul Meld
A probably-overpowered arcane power that allows kaiju wranglers and mecha pilots to become as one with their respective partners.

The Gaijin and the Gorilla Lizard
Speaking of setting fiction, Robin M. English-Bircher's short story "The Gaijin and the Gorilla Lizard" -- written well before I ever considered kaiju for Savage Worlds -- could practically be set in the MKST!!! universe. (Yes, my wife wrote a kaiju story; I have the best wife ever.)
I've been a Godzilla fan ever since I was little, and I've written a few posts here about the King of the Monsters himself.
Godzilla (1954) for Savage Worlds
I argued in MKST!!! for building the kaiju and mecha by just adapting the usual SW races and assuming they're just on a bigger scale. This post shows how to do that with Godzilla.

Godzilla (early Showa Era) for Savage Worlds
And this post shows Godzilla advancing from Novice to Seasoned. I was going to do a whole series of these that took him up to Legendary (which would have been the 2014 Legendary Godzilla) but I got busy with other projects.

Godzilla(2014): Brody and the Hero
Speaking of the Legendary Godzilla, here's a review of the latest Godzilla movie in which I argue that complaints about the "boring humans" are wrong.
KaijuHaiku
What it says: a series of Godzilla-inspired haiku. (Actual haiku, not the fake haiku everybody else writes.)

Mecha
I'm much more of a fan of kaiju than mecha,

How to make a Super Robot with Savage Worlds Super Powers Companion 2nd Edition
Ancillary to MKST!!!, I tackled the idea of using the SWSPC2 to build a "super robot" -- a mecha in the fantastical vein of Voltron, Getter Robo, or Gurren Lagann instead of the quasi-realistic mode of Gundam. Personally, I think there's too much math involved.