(I just need to get this out of my head) There are two kinds of mecha in this world: “real robots” like the walking tanks of Battletech and Dai-Guard and crazy-ass “super robots” like in Voltron  and Tengen Toppa Gurren Lagann.  The former are characterized by adherence to something resembling real-world physics (having limited space for weapons, mechanical breakdowns, running out of ammo) and could easily be reproduced with the “walker” rules (and a little bit from the other vehicle types) in the new Savage Worlds Science Fiction Companion.  The latter is a 100’ superhero that you drive.

Here’s how to build one:

Hindrances
Gimmick (Two Characters): The vast majority of super robots are not intelligent and must be piloted by a human (or humanoid, depending on the setting).  If you’d like to run something more along the lines of Power Rangers, I’d allow splitting the Power Points for building the characters between the human and the robot.

Edges
Dynamic Duo: This might be allowed by the GM as a way of allowing the pilot’s battle prowess to aid the mecha.

Powers
Generic Modifiers: Requires Activation (“Form Blazing Sword!”), Slow to Activate, and Switchable are all common modifiers for super robot powers.
Armor:  As much as you want, but obviously using the Heavy Armor modifier (+4 cost).
Attack, Melee: Heavy Weapon modifier is required (+1 cost).
Attack, Ranged: Heavy Weapon modifier is required (+1 cost).
Awareness: Can simulate scanners and detection systems.
Construct: Required.
Danger Sense: Same as Awareness.
Deflection
Flight
Growth:  +11 points for Gargantuan (at least) and Monster (-2) are required; Big Fists and Long Stride are optional.
Leaping
Parry
Speed: Is it Gundam Wing I’m thing of?  Some of the Gundams have definitely had this.
Super Attribute:  Well, you want a d12+ Strength and Vigor, right?  Not Today is a perfect modifier for bad-ass giant robots.
Toughness: You probably want Hardy, too. 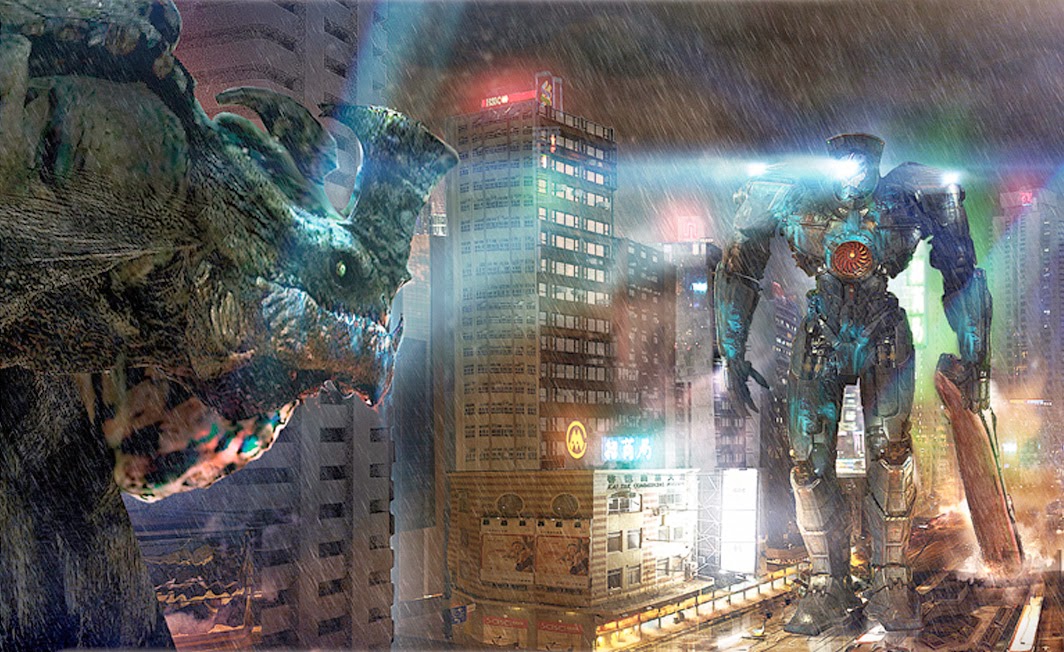 (Of course, Jaegers have two pilots, so you can always combine the second pilot’s power points to add a chain sword, atomic punch, etc…)

By the way, there's also a kaiju detailed in the SWSPC2.  You could probably use these guidelines to make one of those, too.
Labels: kaiju mecha Pacific Rim rpg savage worlds stupid humor