The King is Dead: I Have Changed My Mind About Vampire Boners

One of the earliest novels “from the vampire’s point of view” (as Otto the bus driver would say) I ever read was The Palace by Chelsea Quinn Yarbro; the vampire protagonist is Count Saint-Germain, based on the real-life 18th century con man.  One of the startling choices she made in her approach was to make vampires incapable of sex; since they’re undead and their hearts presumably do not beat, there is no way for the erectile tissues of their bodies to function.  As Yarbro’s work was an early influence on my impressions about vampires and as Saint-Germain is one of those Enlightenment fakers I admire so much, I thought I’d just steal this fairly unique approach to vampire sexuality and work it into The King is Dead.

But then I had a few thoughts:

1)      The vampires need some strength in numbers to maintain control over the humans.
2)      A role-playing game needs opponents of varying power levels.  Even young vampires in Savage Worlds are pretty tough.
3)      I could use the Buffy-style vampire minions from the Horror Companion, but could the vampires really maintain control over the population if thousands of them need to feed every night?  Wouldn’t people rebel?
4)      There’s got to be something in it for the humans if the majority of the population actually buys into this Church of Sathaniel nonsense.
5)      The vampires need servants who can move by day.
6)      Would you choose to live forever if you couldn’t have sex?

So I decided to reverse my position on vampire sex and assume they could breed daywalker children.  I also decided they needed Renfields.

And then I thought “Why does a stake in the heart kill a vampire if their heart doesn’t beat?” 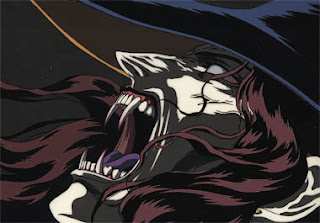 The heart is the seat of life; though anatomists still struggle to understand the mechanism of blood and how it carries life energy, vivisectionists have shown that the heart is a pump that sends blood coursing throughout the body.  Though damage to the brain might impair a body’s function, the body may still live; destroy the heart and it invariably dies.

A vampire must have a way of suffusing his dead body with the life it imbibes with mortal blood and so the heart of a vampire still beats, though its pulse is slow and irregular.  It may not beat for several hours while the vampire rests, as it conserves the vital life force from the vampire’s last meal.  It will beat more regularly when the vampire needs to exert itself, though even then it will never reach the drumming intensity of a mortal heart.  Nevertheless, it beats, and destroying the heart destroys the vampire.

The heart beats and the heart yearns.  The blessing of Sathaniel does not make vampires immune to the temptations of the flesh, though it does reduce their capacity to enjoy and participate in such pleasures.  Arousing oneself for fornication, for example, is a great labor for the male vampire (though admittedly a labor many readily undertake); distressingly, it appears the female is more easily ready (though less readily satisfied).

Dunpeals are the rare children of unions between vampire males and mortal virgins.  (While it is possible for a female vampire to conceive, there is no recorded case of a pregnancy coming to term; the female’s body feeds off the child’s blood and leads to miscarriage.)  Why precisely vampires can only impregnate virgins is a matter of speculation, but it is believed it has something to do with the mingling of hymenal blood and semen.

Carrying a dunpeal to term is difficult and dangerous.  The most successful methods require the mother to drink vampire blood (preferably the father’s) on a daily basis and to supplement her diet with fresh animal blood.  The process seems to be eased somewhat if the mother is a blood relation of the father; the vast majority of Mallean dunpeals are bred within the princely blood lines, and the vast majority of dunpeal parents are grandparent and grandchild.

Raising a dunpeal child is also difficult and dangerous.  They usually spend their early lives on country estates where the deaths of servants can be more easily ignored. The murder of a nanny and several footmen by a hungry dunpeal toddler in residence at a townhome in May Fair scandalized Hammerstadt several years ago; seditionists who trumpeted this accident in their newspapers were executed after a mob burned the home to the ground.

The benefits of having dunpeals to guard the nobility and execute their orders by daylight far outweigh the difficulties in raising them.  Like vampires, they can also use their blood to maintain moroi servants.  They are free to come and go without a homeowner’s permission, making them capable of espionage and acts of theft that their vampire parents simply cannot do.  While sunlight stings their eyes, the blight of day does not burn dunpeals.  It is far, far safer to send dunpeals to maintain peace in the Colonies than to risk a vampire on the months-long crossing.

Of course, dunpeals are as vulnerable to ash wood as any vampire, and they lack the vampires’ immunity to steel and lead.  It is only at great risk to their lives that dunpeals accept missions to the Colonies – it’s far safer to accept a commission in the Polizei and hunt rebels in Malleus – but the rewards are great for the bold and ambitious.

Dunpeals can live for hundreds of years; like humans, they can also be given the gift of unlife and made vampires.  This is, in fact, the reward for which they are willing to risk their lives to thwart the Glorious Revolt.  No one knows the siren song of immortality as much as those who have lived for centuries.

Dunpeals are trained to a variety of roles.  Since they are nobility, it is not expected that they will work for a living, but they must still serve their sires in some capacity.  Dunpeal archetypes include: assassin, courtier, duelist, military officer, privateer, and thief.  Dunpeals have a lifespan of 150 + 2d100 years.

Any NPC archetype may be converted to a dunpeal by adding the following template:
It is believed that dunpeals sired directly by the king may have greater abilities, but no known living dunpeal claims to be a child of Wilhelm the Everlasting.