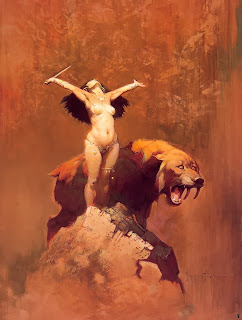 Ayesha the Timeless may be the most inscrutable of the Witches who have retreated from the war in Morden.  She is a naked savage with the soul of a philosopher, a brutal tyrant yet a soulful daydreamer.  Tears fall from her eyes even as her Devolved Men followers burn captives alive at her orders.  She watches the moon with the hunger of a lover.

Those who have survived meeting her say that she has a disconcerting habit of answering questions before they are asked and remembering things that have not yet occurred.  She is as beautiful as a statue; her face is unlined by either laughter or sorrow.  Oddly, she has no navel – a fact her near-constant state of undress leaves revealed.  Hints in her conversation indicate she is older than the history of Saturnyne itself; she often alludes to science far beyond the alchemy of Morden and claims to have travelled the lightning bridge.

Since the end of the Bane War, the Timeless One has been seen roaming the southwestern Darkwall Peaks in the company of a small army of Devolved Men and feathered dragons.  Occasionally they foray into Hyphrates and Cairn Kainen for supplies and captives, but mostly they search the mountains.

Given their similarity in interests and dissimilarity in methods, there is a natural antipathy between Ayesha and the Chimera.  This often extends into skirmishes between their Banes.

Goals
Savagery is the natural state of humankind.  Civilizations rise only to fall.  History is a cycle of evolution and devolution.

So says Ayesha the Timeless and she finds no joy in that knowledge.  She seeks to command the cycle – to be a queen over civilized men and a goddess to barbarians – but she does not rejoice in her mastery.  She only knows it is better to be a master than a slave.

It is unknown what she is looking for in the Darkwall Peaks.  The most popular theory is simply a pass through the mountains to return to her jungle home in the south, but her frequent backtracking makes this unlikely.  It is all too probable that she is looking for some relic of the migration to Saturnyne that will help her crumble all civilization.

Style of Magic
The Timeless One’s magic controls the ebb and flow of time.  She can devolve men and animals into ancestral and parallel evolutionary forms (humans into hominids and apes, birds into dinosaurs); she much more rarely chooses to evolve creatures into futuristic forms (the gargantuan tortoise she uses as her walking castle seems to be one of the exceptions).  Ayesha can also read timelines, simulating precognition and mind reading.  Her control over these abilities seems to be less precise than many of her peers; sometimes even she appears to be confused by her precognition, perhaps explaining some of her melancholy.  Her Banes are less inherently magical than those of the other Witches; being simply flesh and blood beasts, they do not suffer from magical weaknesses like silver and cold iron, but they do not benefit from any supernatural powers.