So I'm going to jump on the Grognardia gaming shelves meme even though I'm not an OSR gamer.  Sue me.﻿ 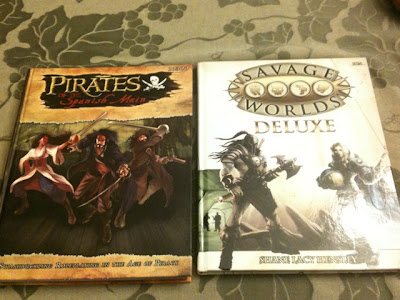 If I'm going to be honest, my go-to﻿ gaming shelf is actually two books that spend most of their time on my coffee table.  The vast majority of my games these days are set in the "real world" sometime between 1600 and 1840 and Pirates of the Spanish Main has all the NPC archetypes, cool fencing Edges, and equipment I need.  Savage Worlds Deluxe is used primarily for magic, monsters, and a few cool new setting rules and modifications.

That is not to say that I don't have an entire bookshelf of game books, because of course I do. 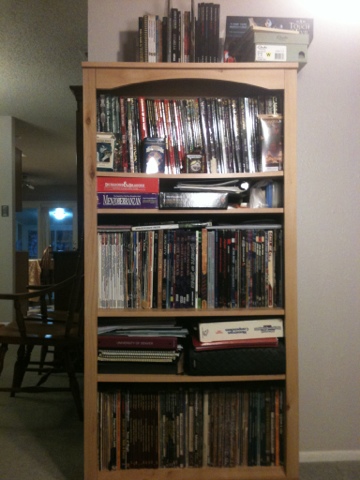 I store my Savage Worlds materials, my "Order of the Stick" books, and "A Touch of Evil" on top of the bookcase in easy reach.

The top shelf is dedicated to White Wolf games.  We have the entire run of "Kindred of the East" books but have never actually run a game.  We've got more "Changeling: The Dreaming" and "Werewolf: the Apocalypse" material than anything else.

The fourth shelf is mainly folders and notebooks full of the ephemera of old campaigns.

The bottom shelf is where the D&D books sit. "Bigatures" (the popsicle-stick puppets) were an attempt to get people to talk more in character.  It kinda worked, but only kinda. 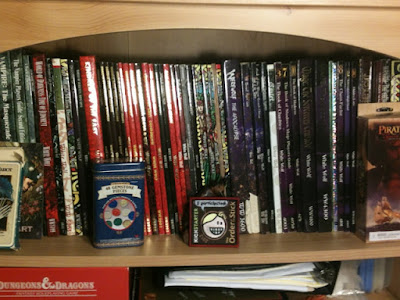 I participated!  And I have not played the new non-collectible "Pirates of the Spanish" main card game.  It just sits there with Jack Hawkins glaring at me. 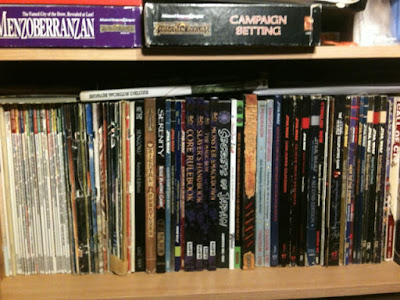 I've never really made any use of "Menzoberranzan" either, dagnabbit. 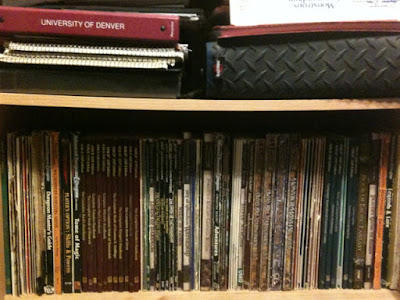