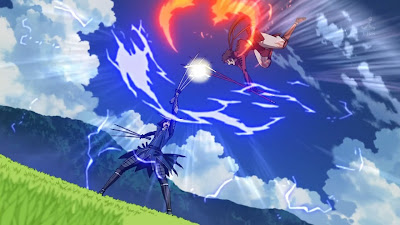 Imagine a video game about the American Revolution where George Washington crossed the Delaware in a single bound while swinging cherry tree-chopping axes in both hands, Benedict Arnold had magic Satan powers, and Thomas Jefferson and John Adams got into explosive acrobatic swordfights every time they ran into each other.  Now imagine that video game spawned a cartoon, a live action TV series, a theatrical cartoon movie, a stage show, a whole bunch of other merchandise, and was actually set in Japan's Warring States period.
Yeah, that's Sengoku Basara.
I could explain it in more detail, but what's the fun in that?  The anime is available on Netflix and Hulu, so just go watch the first five minutes of season 2.  That will explain everything.
Sengoku Basara – Savaged! is a Savage Worlds setting of military mass battle martial arts mayhem. The players take on the roles of anime-style, amped-up versions of history’s great leaders to enact ludicrously anachronistic revisions of the fights that shaped the world. Play Julius Caesar and Vercingetorix throwing fireballs at each other during the Siege of Alesia! Play the tragic love of Henry V and Joan of Arc! Play Abraham Lincoln swinging his axe against the vampiric hordes of Jefferson Davis (sorry, wrong franchise)! Or just go all Sengoku Jidai and wage the campaigns that established the Shogunate!
Sessions can alternate from the intimate – former friends divided by their loyalties share drinks or a weary general tills his garden – to the grandiose – armies swept aside with a single sword stroke or castles brought down with a single punch --in a heartbeat. As overt-the-top as it gets, Sengoku Basara is always earnest and heartfelt.
Mystical Throne Entertainment’s Ultimate Mass Battle Guide would probably be helpful, but I haven’t actually read it. There’s some expanded heroic intervention Mass Battle rules in an old Shark Bytes, I think, but I couldn’t find them. Reality Blurs’ Iron Dynastycan provide you with some gear and NPC archetypes (and a bunch of appropriate but kind of redundant Edges). The FREE Deadland: The Flood Player’s Guide has some nifty stuff, including a Hindrance that seems tailor-made for Sengoku Basara – Savaged!.

Samurai Hero (Race)
Player characters in Sengoku Basara – Savaged!  are not normal humans. They are superhuman martial artists capable of channeling the elements through their fists or weapons and withstanding incredible amounts of pain. They don't even look like normal people; while all the foot soldiers are running around in historically accurate armor, the generals commanding the battles are wearing skintight tigerskin leotards and leather bolero jackets. These astonishing men and women are known as Samurai Heroes.
Samurai Heroes may – like any other character race -- take one Major Hindrance and up to two Minor Hindrances on top of the Hindrances associated with their race for additional attributes, Edges, skill points, or starting funds as normal.  Yeah, they’re insanely bad-ass, but that how the setting works.
While all Samurai Heroes are functionally the same race, some may not appear as human as others.  Honda Tadakatsu, for example, looks a heck of a lot like a robot.

Given that Tokugawa Ieyasu flies around on a giant robot (Piloting), there’s really no skill that’s off the books for this crazy-ass setting.
Hindrances
I can’t think of any that would be really inappropriate; eyeglasses had been invented in the real world by this time and Sengoku Basara is pretty blithely anachronistic anyway, so Bad Eyes (Minor) is fine.  You might even want to import a few from Deadlands: Reloaded; Takenaka Hanbee, for example, is definitely Ailin.’

Feel free to work in whatever martial arts-themed Edges you want from The Flood or Iron Dynasty, but I don’t think you need them.

Requirements: Command, Followers, Legendary
You don’t just have Followers, you have a whole freakin’ army!  Sure, you can’t actually use them for personal-level combat and you certainly don’t want these guys cramping your style during a duel, but you’ve got the manpower to make a bid to rule Japan (or the nation of your choice)!
Additional ranks in Army increase the army’s size 25% per the relative number of tokens in the Mass Battle rules.

Requirements: Novice, Brawny, Strength and Vigor d6+
You are freakin’ humongous!  Like Toyotomi Hiedyoshi or Tadakatsu, you are a giant amongst men.  Your Toughness is at +4 but attackers are at +2 to hit you, just like a wild rhino.

Requirements: Novice, Wild Card
You have a backpack, purse, or other “pocket” that is somehow able to contain a ridiculously oversized object (like a giant sledgehammer or a gatling cannon) without affecting your encumbrance.  I don’t get it either.

In the Sengoku Jidai proper, Medieval Hand Weapons, Armor, and Ranged Weapons are available; Black Powder Ranged Weapons and Special Weapons are period accurate, but Oda Nobunaga wields a sawed-off shotgun and his wife Lady Nōhime somehow fits a bazooka and a gatling gun under her kimono.

Blood & Guts, Born a Hero, Heroes Never Die, and Joker’s Wild are all in effect from Savage Worlds Deluxe.

AND EVERY PLAYER CHARACTER STARTS AT LEGENDARY.

Umm…  You’re going to need to make it all up yourself or use Iron Dynasty, I guess.  Sorry.  Pirates of the Spanish Main might help if you did a Sengoku Basara-style American Revolutionary War.