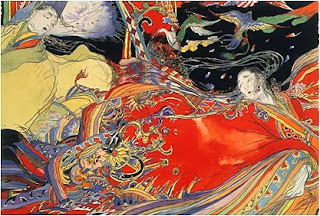 Mappō Monogatari (Tale of the Latter Days of the Law)


It is sometime in the 11th century and Emperor Reizei rules over Japan from the capitol of Heian-Kyo.  The emperor’s family and the nobles related to them lead idle lives of poetry and political maneuvering while the imperial bureaucracy tends to the running of the nation, but this idyll is founded on self-deception and willful ignorance.


Beyond the lands of men lies uncharted wilderness: primeval forests, perilous mountains, and burning volcanoes.  The wilderness is home to ascetics fleeing the false pleasures of Heian-Kyo, exiles banished from the imperial presence, and yōkai.  Ancient badgers, foxes, ravens, and wolves gifted with preternatural sentience and magic, the yōkai have begun to turn their thoughts to the home of these human invaders.


Outside the capitol, the lands of men are home to burgeoning samurai clans engaged in battle to expand their territories.  Villages are burned to provide light for nighttime raids and charnel grounds wreath the land in the smoke of burning flesh.  Restless ghosts called onryō haunt the night, seeking to avenge their violent deaths against the imperial court that permits such rapine and destruction.


Inside the capitol itself, a spiritual malaise underlies all the forced gaiety.  The games of seduction and pursuit of beauty that occupy courtiers’ time are feeble gestures against the knowledge that these are the Latter Days of the Law, the end of the Three Ages of Buddhism when the Dharma declines and mankind falls into impiety and sorrow.  The western half of Heian-Kyo has fallen into ruin and oni – demons of desire and darkness – make the capitol their hunting ground.


Perhaps not all is lost.  Perhaps the miko – the maiden priestess – who incarnates the deity at Shimogamo Shrine is truly pure of heart and body.  Perhaps the aspiring monk meditating at Enryaku-ji will achieve enlightenment.  Perhaps the young onmyōji – the yin-yang sorcerer – toiling away in the Bureau of Onmyō has the spark of greatness.  Perhaps even those who live by bloodshed can achieve grace, and a samurai might find his sword can protect as well as destroy.


Demons, ghosts, and monsters crawl in the night, creeping ever closer to the imperial palace.  Will the forces of despair overwhelm the last fluttering light in Japan, or will heroes rise to stave off the darkness?


Does Heian-Kyo even deserve saving?


Mappō Monogatari is a Savage Worlds setting of beauty and despair, terror and sacrifice.  It requires the Savage Worlds Horror Companion to play.


Races
Humans are recommended as the only player character race, but God-Descended (as Elf), Half-Kitsune (as Half-Elf), Half-Oni (as Half-Orc), Kappa (as Atlantean), Tengu (as Avion), and Yōkai (as Rakashan) may be apermitted at the GM’s discretion.  Yōkai covers Kitsune (foxes), Mujina (badgers), Okami (wolves), and Tanuki (tanuki); different species of yōkai (foxes and wolves, for example) may consider each other to be Racial Enemies.


Skills
The only wheeled vehicle in this setting is the ox-drawn carriage of the nobility, which is more often used for ceremonial purposes than actual travel, so Driving is not permitted.  Piloting is also removed.  GMs may add Guts if they consider it appropriate.


Hindrances
Eyeglasses do not exist in Heian Japan so Bad Eyes is always a Major Hindrance.  The lack of firearms makes Bullet Magnet from the Savage Worlds Horror Companion superfluous.  Given the rampant belief in religion and superstition in the real-world analogue of the setting, Doubting Thomas is inappropriate and so removed.


Gear
Though the katana is known in this period as a tachi and there are some differences in the shape of the blade, it is essentially the same weapon and so is available for purchase.  The habit of wearing the daishō (paired long and short sword) is still in the future.
The following gear is not available for purchase in Mappō Monogatari:
Hand Weapons: Rapier, all Modern, all Futuristic.
Armor: Plate Corselet, Plate Arms, Plate Leggings, Plate Barding, Small Shield, Medium Shield, all Modern, all Futuristic.
Ranged Weapons: Crossbow, All Black Powder, all Modern, all Futuristic.
Vehicle Mounted & AT Guns: All.
Special Weapons: All.
Mundane Items: Camera (all), Cellular Phone, Flashlight, Lighter, Handcuffs, MRE, War Horse Barding, Computers (all), Surveillance (all).
Savage Worlds Horror Companion: All.


Powers
The only Arcane Backgrounds available in this setting are Magic and Miracles.  There is a great deal of overlap between the two forms of magic, with onmyōdō incorporating Buddhist chants and mudras and both forms concentrating on banishing and exorcising spirits.
Banish entity from the Savage Worlds Horror Companion is used in place of banish from Savage Worlds Deluxe.  Through the ritual use of bind entity, onmyōji bind spirits to their service as shikigami; these often, but not always, take the form of paper manikins (treat as marionette golems).