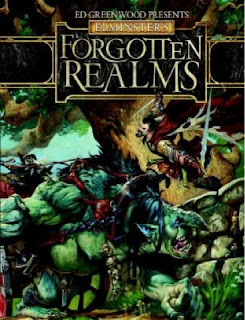 “Your mileage may vary,” is the single most applicable thing I can say about Ed Greenwood Presents: Elminster’s Forgotten Realms (hereafter EGP:EFR).   The vast majority of gamers may find little to interest them, but long-time Realms fans like myself will find it a welcome (if sometimes frustrating) insight into Greenwood’s own approach to running the Forgotten Realms.  EGP:EFR is, unfortunately, not the book some of us hoped for.  It is not an unexpurgated Gray Box cyclopedia with brothels in place of festhalls or Tyche instead of Tymora.  It is not a guide to Ed Greenwood’s home campaign -- the original, pristine Realms unmarked by Avatars or Spellplagues.  It is, however, a delightful insight into how Greenwood makes the Forgotten Realms come alive for his players.

The book is largely a collection of system-agnostic* Realmslore with a small selection of reproductions of some of the original notes Ed Greenwood submitted to TSR back in the late ‘80s.  It reminds me of the old Volo’s Guide… books in that it spotlights in-world trivia – those small but telling details that improve verisimilitude -- but it’s far more free-ranging than the travel guide approach of the Volo’s… series.  Instead of the inns, taverns, and festhalls of one specific region there’s a plethora of anecdotes about herbs, religion, the theater, and more.  I’ve been waiting years to learn more about plays and performing troupes of the Forgotten Realms, so I am ecstatic about the tidbits and oddities EGP:EFR contains.

Interspersed amongst these anecdotes about how gnomes and Halflings run the laundry industry in the Heartlands and noble titles of Waterdeep, there are (unfortunately brief) telling insights into how Greenwood runs his Realms.  The most obvious is the lesson of all this trivia itself: the specific is universal.  The more alive the setting seems, the more invested the players will be.  I can’t imagine me personally ever being able to master enough of this lore to use it all, but (just like in running a historical campaign) the more I know about the setting, the more nuanced I can make it for my players.

Nuance is certainly important here.  Something stressed over and over again in various subtle ways is that the Forgotten Realms is not a black and white, good versus evil setting.  Even the churches of good-aligned gods have secret agendas that lead them into conflict with other good or neutral religions and states; the church of Ilmater’s secretive “rob from the rich” branch is the most entertaining example (especially for a Lawful Good god), but the two-faced sneakiness of true Neutral deity Gond’s war on magic is a surprising revelation (as is the relative harmlessness of the church of Malar in Cormyr).  The Realms is a world where two heroes can disagree and both be in the right.

This demonstration of the conflicts of interests between “good guys” helps reinforce Greenwood’s storytelling advice to keep multiple plots simmering.  The Harpers, Zhentarim, and other secret societies have been part of the setting from the beginning, but somehow it never clicked for me before that the Forgotten Realms is a hotbed of intrigue.  There are lengthy sections of the Zhentarim and the slave trade, guild rivalries and drug smuggling.  The Realms is almost more an espionage setting than anything else and petty plots and secret plans are scattered throughout the book.

The Good
"Gods and Followers" is easily the most insightful chapter in the book.  It really helps make sense of a setting where people explicitly worship evil gods (hint: think of the Realms more in Greco-Roman polytheistic terms).  It's hilarious how Cyric gets a single paragraph; you can tell the Avatar Crisis never happened in Ed's home campaign.

There's no index, which is a genuine problem because of how vague the table of contents is (and that there's no electronic version a reader can just search).  There's also a surprising number of textual problems.

Honestly, as much as I love the Realms, I will never be able to incorporate "Realmspeak" into my games.  Sometimes I wish Greenwood would just use normal words for normal things (what's wrong with "barkeep?").

It really could have been 192 pages of Ed Greennwood's typewritten notes from when he and Jeff Grubb were preparing the original boxed set.  A lot of us would have eaten it up.

The first sentence of "Becoming Noble in Waterdeep" is "To put it succinctly: Forget it."  This is an atavistic remnant of the bad GM advice that told us Khelben Arunsun should always be higher level than any player characters and Elminster should tease and annoy PCs who ask him for help.  It runs counter to Greenwood's own injunction that "Player characters have the freedom to do their own thing."  If any player running around Waterdeep in one of my campaigns doesn't want to join the nobility or become a Masked Lord, then I think something's wrong with them.  At least I can salvage that section as examples of what difficulties social-climbing players might face.

It isn't what I wanted but it's damn good anyway.  Now I want Ed Greenwood to write a Sherlock Holmes pastiche.  He knows why.


*Wizards of the Coast would probably say “edition-free” but the lack of crunch associated with even medicines and poisons means I could as easily use Savage Worlds as D&D Next to run my next game using this book.  In fact, since the information contained in EGP:EFR is the kind of quiet world-building that fits in a role-playing-heavy game, I’m more likely to use it for a Savage Worlds duet with Robin than I am in my more action-heavy D&D Next game.
Labels: dungeonsanddragons Forgotten Realms rpg savage worlds