This concept actually got use in my foolishly-abandoned Pirates of the Spanish Main campaign earlier this year.  I moved a bit further away from the golden boy to a more hedonistic, adult Dionysus.  The story became that Saint Brendan’s voyage to the New World was actually taken to dispose of the more hostile (to the Church) or troubling (to the Church) bits of paganism that were still lurking around Europe.   St. Brendan and gang entombed the Undying Youth on a remote Caribbean island where – many centuries later – he was mistakenly freed by cannibalistic Caribs (Tiger Lily’s tribe).  When my crew stumbled upon the island, they found his opened tomb overgrown with lush grapes fermenting on the vine and only the words “Pater Pan” visible through the growth.

Wisely, they chose to bargain with the god instead of fighting him. 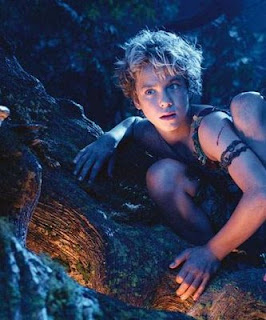 
The lookout nodded sleepily in the crows nest until his growling stomach woke him. Outrunning the hurricane had sent the ship into unknown waters and they were quickly running out of rations. He rubbed the sleep out of his eyes and scanned the horizon. There, resting neatly beneath the morning star, was an island! He climbed to his feet to shout the news to his crewmates, and realized he wasnt alone.

He spun and faced the speaker. A boy wearing naught but a slim belt from which hung a set of pan pipes and a knife was perched on top of the mast. He was slim and beautiful and the pirate's first covetous thought was that he'd make a high bidder an excellent cabin boy. The pirate found himself nodding assent to the question.

"Pirates tried to steal me once," whispered the youth in a conspiratorial tone.  "Now I steal pirates."

Alarmed, the lookout tried to grab the boy, but the youth easily side-stepped him. Anger darkened the child's brow and with a lightning-swift movement he drew his knife and slit the lookout's throat. The pirate collapsed over the side of the crows nest and bled his life out onto the deck below.

The child sat down cross-legged on the dead man's back and put his sirynx to his lips. He piped a strange, wild tune that soon echoed through each unsuspecting crewman's mind. Dreams of gluttony and pleasurable company reddened into phantasms of sacking and pillaging. Each man became his own dream's villain. They were pirates -- enemies of all mankind!

The captain of the vessel lurched forth from his cabin, drunk on his own villainy. In his song-maddened mind he knew booty waited at hand, ripe for the plucking. That island! That island must house a buried treasure! Mr. Starkey! he called to his first mate, Make heading for that island!

He has been known by many names throughout the ages -- Adonis, Bacchus, Dionysus, Tammuz, and even Pan but it is unknown if he is truly any of those deities or instead some stranger being that inspired the myths. What is known is that soon after the New World was discovered, mariners found him there and that he amused himself by preying on pirates.
The Undying Youth's most insidious game is to lure a crew of pirates out to some deserted isle and charm them into playing villains to his hero. Sometimes he'll even kidnap children from nearby neighboring islands or passing ships to serve as damsels in distress and belike. Invariably, the charmed pirates go mad as the role forced on them transforms them from real people into absurd caricatures. When he has slain them all, the Undying Youth will forget all about the pirates hes just destroyed and go searching for new toys to play with.

The Undying Youth has forgotten much of who or what he once was. Essentially, he's experiencing a godly form of senility. If ever he could change shape or command the vines, those skills have been lost. He experiences strange visions and unwelcome memories of his earliest days in some wooded land near the Mediterranean when, perhaps, he was just a normal boy. He wakes in the night crying for his mother. Sometimes, when a pirate is really lucky, he completely forgets what a firearm is but perhaps the greatest weapon against him might be a pretty girl.