The King is Dead: Secrets of the Bloodstained Blade 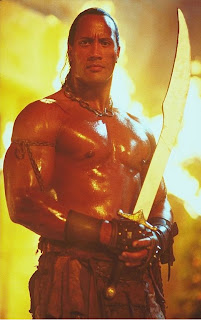 Shimon the Swordsman spent his early years as a fisherman in the land of Tzion; it was here that he first met the miracle-worker called the Pariah and became one of his followers.  Shimon left his nets and his family behind and journeyed with the Pariah to the great city of Tzion in order to preach brotherhood and mercy.  It was there that he found his true, grim calling.

After King Hordos the Dark Father and his daughter and mother Salome drank the blood of Yohanon, they called down death upon the rabble-rousers and rebels who preached against their rule.  The man called the Pariah was betrayed by his follower Kerioth and arrested; he was denied by his disciples, denied by his family, denied by his people, and condemned to death with thieves and murderers as his companions.  Shimon was one of those who denied him, and Shimon fled into the desert in shame.

When Malkuth, a vampire servant of King Hordos, came to arrest the Pariah, Shimon took a sword from one of the Remulan centurions accompanying the vampire and struck off the vampire’s head in a single blow.  It did not save the Pariah, but it proved that vampires could be killed.  Alone in the wastes, Shimon stared at the black blood crusting the steel blade and pondered how to avenge the man of peace he had loved and followed.

The pariah’s last words to Shimon had been “He who lives by violence, shall die by violence.”  Thunderstruck, the former fisherman realized what that meant.  He turned his feet to the nearest town with a large Remulan presence and sold himself into slavery as a gladiator.

Under the sword-name Scopulus (Remulan for “crag” or “rock”), Shimon trained his body and hardened his soul.  He learned every trick he could from everyone who would teach him – Remulan, Kimmerian, Südlich, and more – and became the most famous gladiator Remula had ever known.  He earned his freedom, opened his own gladiatorial school, and began his mission.  In secret vigils only allowed to his most trusted students, he preached the word of the Pariah; in darkened catacombs accompanied by those same students, he hunted vampires.

Age stole his strength and he died a bloody death at the hands of a vampire, as he knew he would, as he knew he must for preaching peace and living a life of violence.  His students secretly protected the Remulan Empire for generations, but at last the hordes of Etzel swept in and scattered them to the winds.  From this battered, broken fellowship came the Bloodstained Blade.

Adepts of the Bloodstained Blade pray to the Pariah, the Secret Sun, for the strength to fight the forces of darkness.  There are several paths by which one may approach the Pariah, codified into the following sets of Minor, Major, and Mortal Sins:
·         The Path of Charity. The Pariah took a vow of poverty and forsook his family name.  You follow his example of humility and giving.  Minor: refusing to give alms to beggars and the poor; Major: selling the services of your sword as duelist or soldier; Mortal: refusing aid to those in mortal peril.
·         The Path of Light: The Pariah is the Secret Sun, the Light of Truth given to creation by the Unseen Maker.  You stand against the darkness.  Minor: missing sunrise prayers regardless of fatigue or injury; Major: lying for any reason except to protect the secrets of the Bloodstained Blade; Mortal: giving false witness against those accused of capital crimes – even your enemies.
·         The Path of Peace – Even as he was dragged away to his death, the Pariah preached that men should be brothers.  You have vowed to preserve peace even at great cost to yourself.  Minor: standing idly by when violence is threatened against others; Major: inciting violence between enemies of Sathaniel; Mortal: killing a fellow human being.

Thanks to +James Schrecengost for the assist with the sins!