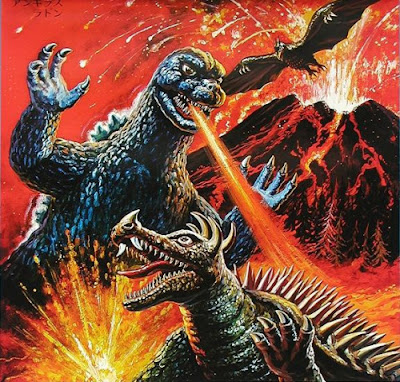 Godzilla's closest allies are also two of his oldest foes: the prickly quadruped Anguirus and the supersonic flyer Rodan. Both have frequently fought alongside Godzilla against King Ghidorah.

This quadrupedal mutant angilosaurus is surprisingly swift and spry despite the limitations of its physiology. As territorial as Godzilla itself, Anguirus frequently takes on foes more powerful than itself -- such as Gigan and King Ghidorah.


*It became pretty obvious after some playtesting that Enhanced Damage was necessary for damage field to work on the kaiju scale, so it's available for the same price as with attack, ranged.

This gigantic mutant pteranodon may be the fastest kaiju in atmospheric flight. Originally appearing as half of a mated pair, Rodan grew less territorial and antagonistic after its mate died..

EDIT: I also promoted Anguirus and Rodan to Cosmic-level monsters.