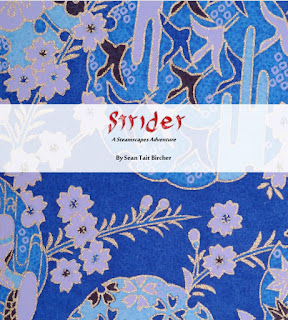 My first solo product is available now at DrivethruRPG!  And at Studio 2 Publishing!

Strider: A Steamscapes Adventure is a multi-chapter module I donated to the Steamscapes: Asia Kickstarter. Steamscapes head honcho Eric Simon felt I really deserved to make some money off of it, so it’s been slightly reformatted and made available for public purchase a few weeks ahead of Steamscapes: Asia.

Strider: A Steamscapes Adventure sees the player characters on a journey across early Meiji Japan, as they guide a geisha automaton on a secret mission to persuade the genius who built her to build a state-of-the-art weapon for Japan. There’s angry ronin, corrupt politicians, hulking iron oni, stealthy assassins, and even wild doomsday cultists to contend with as the heroes journey across the country. Secrets will be revealed and trusts betrayed!

Strider is self-contained and does not require Steamscapes: Asia (for that matter, it doesn’t really require Steamscapes: North America if you don’t care what some NPC Edges do). It can easily be played as a short campaign or inserted into any other steampunk setting with minimal modification. Strider contains new rules for indirect fire and a new race: the karakuri hiko, Japanese automatons who are openly accepted in society. It also contains an appendix of NPC archetypes easily adapted for use in any Savage Worlds samurai-and-ninja setting.

I look forward to feedback (good and bad) on this adventure. I like to think I made interesting use of the Savage Worlds interlude and travel rules, but I’m curious what others think. Leave comments here or review Strider: A Steamscapes Adventure at DrivethruRPG or Studio 2!