Putting a Pin in a Weird Idea 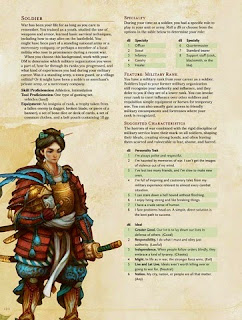 For all its faults, the classic AD&D 1st Edition Oriental Adventures was an honest attempt to take Asian fable and fantasy and fold them into Dungeons & Dragons. In fact, Kara-Tur – the setting developed out of Oriental Adventures – was a pretty straightforward expy of Asia (with two Chinas and two Japans). It’s actually a much more authentic Asian setting than Legend of the Five Rings.
What if someone (like me) created a D&D setting that did the reverse? What if – instead of fitting an Asian fantasy setting into the D&D rules – you just fit D&D-style fantasy into an Asian setting?

What if such a setting just had elves instead of kitsune? Tieflings instead of oni? Halflings tending rice paddies and gnomes building karakuri? What if the imperial family were dragonborn descended from godlike ancient dragons?

What if this setting just embraced the assumptions of D&D instead of wrestling with them? What if there were dungeons just like normal, with the usual assumptions of an ancient world and previous civilizations? What if “kami” was just a word used to describe celestials, elementals, feys, and fiends? What if murderhobory was still the lifestyle of choice for desperate peasants eager to stop tilling the soil? (It wouldn’t be so much different from the life of Toyotomi Hideyoshi.)

One of the pseudo-Japans in Oriental Adventures is called “Kozakura,” which translates into “Little Cherry Blossom.” That always struck me as a weird name. Wouldn’t a nation rather be known as “the land of ten thousand cherry blossoms?”

Wouldn’t “Senbonzakura” be an awesome name for a setting like this?
Labels: D&D 5e dungeonsanddragons Japan rpg Wagakki Band